Johnny Appleseed Day 2020 – Saturday, September 26! Johnny Appleseed Day is the birthday of a legendary American named John Chapman who was a pioneer in planting trees as an activity or obligation, not a hobby. He was many things such as the missionary, nurseryman and a conservationist. Many people confuse him as a fictional character but when they get to know that he was a living, breathing human being they become elated, to say the least with wonder.

He planted trees on places like Indiana. Pennsylvania, Ohio, and Illinois. Not only that he used to have a deep care for every living animal. So, there is a day known as Johnny Appleseed Day to commemorate his birthday which is done mostly on September 26th each year and thus show honor to this legendary figure in American history.

When is Johnny Appleseed Day 2020?

Every year Johnny Appleseed Day celebrate two dates, either March 11 or September 26. The September date is Appleseed’s acknowledged birth date. However, many people across the country prefer the March date due to the planting season. 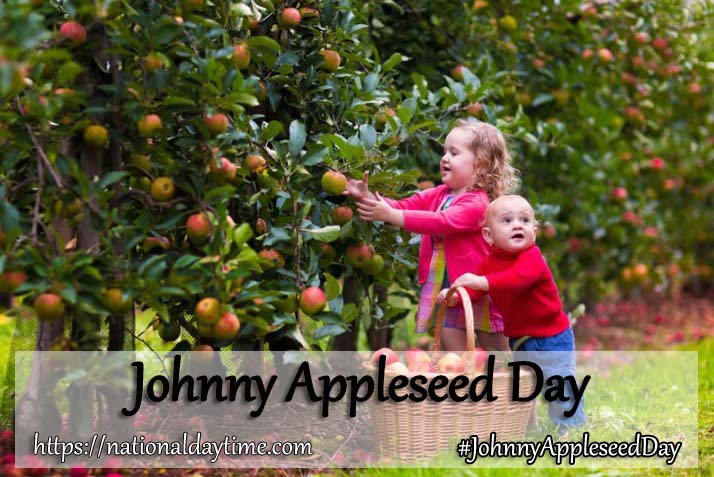 Johnny Appleseed aka John Chapman was born in Leominster, Massachusetts. Not much hasn’t been revealed about his earlier days. By year 8, he used to work as a nurseryman. Legend has it that he used to plant trees in a random manner while his venturing to the west. It is also said that he used to revisit those trees for further caring and too see their progress. It is assumed that he died at the age of seventy but there is no hardcore proof to back that up. So, the day was formed to show the honor he so much deserves.

How to Celebrate Johnny Appleseed Day 2020?

To show honor to Johnny, the best thing you can do is by indulging yourself in eating apple or Appleseed. You can also plan on planting some trees on this day plus you can visit the place where Johnny was born. You can also distribute some apple or Appleseed among the homeless people living on the street. If you can exert the same mindset Johnny had and start planting trees that would be unarguably the most respectful way of celebrating him. Make sure you post about this day on social media sites with the hashtag of #JohnnyAppleseedDay. Make a vow to yourself for not just walking the walk, but also talking the talk like Johnny did.

Why did we love to celebrate Johnny Appleseed Day?

Apple is a good source of fiber and provides many health benefits and also there is the famous saying “An apple a day keeps the doctor away”. So, this is one of the most significant reasons to celebrate the man who planted apple trees every chance he got.

So, we hope that you would partake wholeheartedly and spontaneously and spread the love like Johnny Appleseed might have used to do!

National Boyfriend Day 2020: When & How to Celebrate National BF...

World Smile Day 2020: When and How to Celebrate Happy World...

Mid-Autumn Festival 2020 – When & How to celebrate Moon Festival...